Sterling has been languishing for almost a month, unable to find fresh impetus above February’s peak. On Friday, the monthly GDP growth figures (06:00 GMT) for April could be good news for the UK economy, though whether the data can energize the pound bulls remains to be seen as the spread of the Indian variant puts the final stage of reopening and hence growth prospects somewhat in jeopardy.

The British government opened the roadmap for easing lockdown restrictions in mid-April, allowing non-essential shops to resume activities as the vaccination rollouts were a national pride back then, progressing above target and faster than those in other developed economies. As a result, retail sales soared by more than double the pace analysts anticipated in April, while consumer confidence surged beyond pre-pandemic levels, indicating a consumer-led growth boom in the second quarter.

On Friday, monthly GDP growth figures for April could give form to this optimism. Although the month-on-month change is expected to be tenuously higher at 2.2%, analysts estimate a whopping boost to 1.5% in the three-month average gauge compared to -1.5% seen previously, while the annual expansion is forecast to skyrocket to a record high of 27.6% versus the minimal 1.4% reading posted in March. The industrial and manufacturing production data released on the same day are also projected to print a record double-digit growth despite a potential monthly pullback. 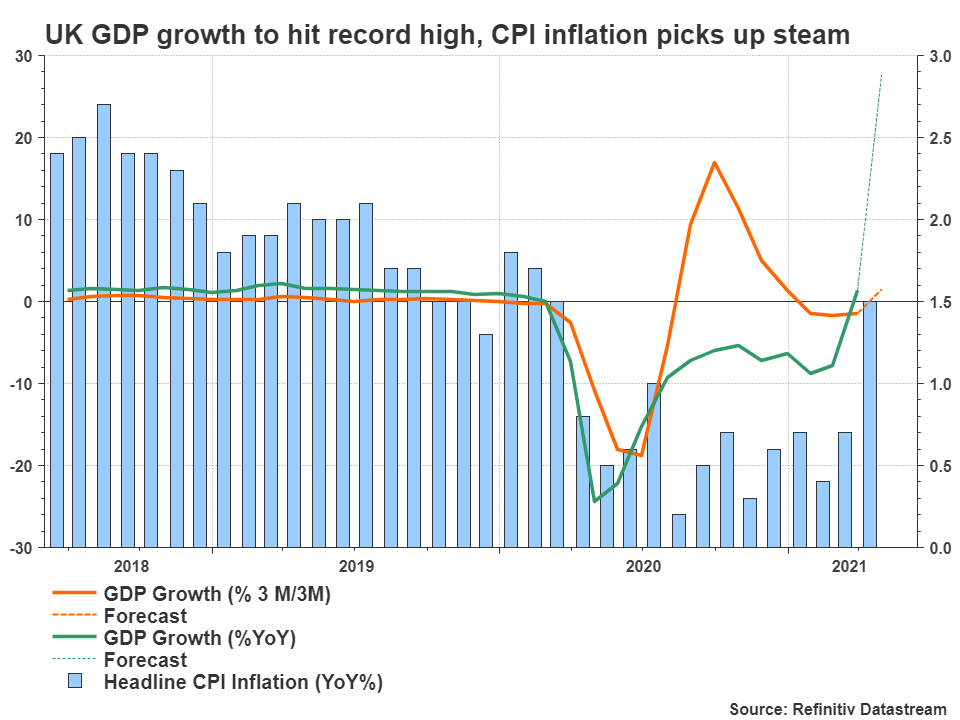 In mid-May the government moved to the next reopening stage, lifting bans on retail and hospitality businesses. Hence, the economy has likely further build its positive momentum in the second quarter and the growth sparkle could even extend to the third quarter if the remaining restrictions are removed as planned on June 21. That said, the latter is still in doubt as the spread of the fast-transmittable Indian variant, which elevated UK infection cases to the highest since the end of March, could delay the complete reopening for at least two weeks, especially if hospitalizations prove to be a wave and not a ripple.

Perhaps Boris Johnson would not like to derail the progress the economy has made and could keep some important limitations in place when the official announcement is made on June 14. Nevertheless, the UK is at the top list of the most vaccinated countries, aiming to inoculate all adults by the end of July. Therefore, hopefully another wave of infections could be relatively more manageable.

Pound could shrug off GDP data

Forex has helped avert a currency run, but continuous inflow has its

Why should you try listings to attract Forex and Crypto brokers?

Market not worried about ‘Freedom Day’ delay but pubs,…

Former FDA Chief Says COVID-19 Variant May Cause Surge In…